Recent Trip to the UK

On the 27th September this year, I went out green laning with Alan, Dave and Ant. Ant rode shotgun in Dave’s 90’s and I traveled with Alan in the lap of virtual luxury in his Disco which had all it’s windows intact. We went north east of Fowey direction, we did various lanes out that way. Alan had his roof rack on to protect his roof, which had taken a beating on an earlier trip. We did some pretty awesome lanes, got turned back a couple of times, but the short grass of a manicured lawn didn’t stop us. We cleared a fallen limb of an ash tree, cleared it right up onto Alan’s roof rack. Strapped it down and continued on our merry way. We went into a forest where we shouldn’t have been, I directed Alan onto the better tracks, rather than the fun looking direct route, at the other of the fun route, Alan took the direct our journey into his own hands, up the fun track we went, some low hanging fallen branches which we both noticed, but too late as a single broken brack entered the rear of the truck guided by the roof rack through the roof light side window. We had great fun. Here are some pictures taken on my old phone. 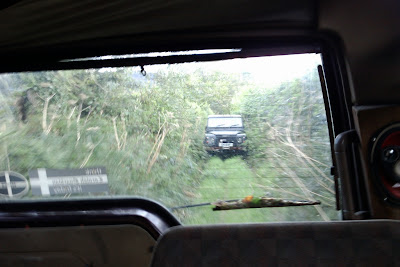 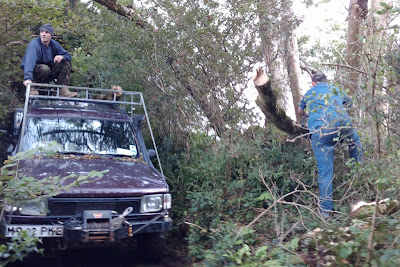 Alan sawing the easy way, and Ant surveying the rest of the job

All the pictures are here

These are a few video clips taken on my phone, poor quality..