Thought this morning Tigger only went out through the window as far as the window ledge, then when another cat came on the scene he howled at the other cat, until I let him in again and the other cat ran off. He hasn’t yet got the hang of fighting with his opponent yet, just yelling, what I can only assume are obsenities.

We let Tigger out into the big wide world, on Sunday evening, we opened one of the sash windows and he gingerly went out onto the window sill. Then onto the ground outside and with in a few minutes he’d disappeared into the trees. Tigger came back a few times during the following 20 minutes then we decided to bring him in so that we could go out. All had gone well.

Today; Tigger was going a little wild, so Hannah let him out this morning at about 9.15. He took off into the bushes. Hannah was once again concerned worried, but then at about 12noon he came back, Hannah spotted him, called his name and came running across the patio outside and jumped in through the open window!

We’re thrilled that our Canadian cat is finally getting out and about.

Also the last picture there is the clock tower in Maidenhead all lit up at night.

As promised, I have now done it;

So, in a surprising turn of events (to me), I was informed that in Land Rover did not in fact fail it’s MoT, I was just being wound up. In fairness too, I never did ask in so many words if it passed or not, I just made assumed, there by making an ass of me in this instance. (To assume is to make an ass of ‘u’ and me).

So I now have a split pin, for which I could not a place to fit it, and I did look, but like Alan said, he doesn’t think there is a hole in the rod end for the split pin, I suggested just bending it around the threaded part. But I suspect I’ll just keep the pin in the dash for old time sake.

Insurance is next along with the road tax, I love taxing my Land Rover. “Why?” Because it’s free!

Below is a nice picture of Andrew driving a tractor: 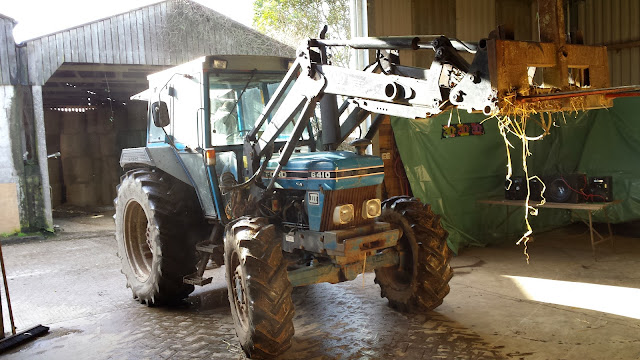 Alan is putting the Land Rover in for MoT on Thursday at 4pm. I am pretty excited! This past two years and a bit is the second period of time that it has been off the road since I have owned it. So to have it back on the road will be great.

Apparently it needs a new fuel sender unit, so that’s been done today by Alan.

Ian (Hannah’s friend) came and visited us on Sunday, we had a roast for lunch then went for a leisurely walk along the Thames and afterwards to a pub for hot chocolates, I had a nice cup of tea. In the evening Hannah and I went to see a fireworks display (For Guy Fawkes night, a celebration of this fellows attempt to blow up parliament in the 1500’s – ok, well that’s no entirely true.). Here are a few pictures:

We went and visited some National Trust gardens today, about an hour north of Maidenhead. Very pretty, we spent a few hours walking around the gardens, a lovely way to spend a day. Nice to get in free too!