We are regularly seeing 32 in the car, not kph, not the channel on the radio, not the rpm, not even the odometer. No, the temperature, and believe it if you will, that is in C, not K or even F, yes Celsius. Pretty hot it has been and very humid, the humidity has been dropped as low as 68% recently, obvious now (in the evening) it’s up in the low 90’s. We hear that it’s going to be like this for the whole of September!

Hannah made some little cocktail pasties, 16 in all, though we only have 14 remaining now as we had to eat two because they are SO GOOD!! Like really really good, even thought the one I had was cold it was very still VERY GOOD! I am looking forward to eating the rest. I expect we’ll get a picture of at least one of them at some point.

Today I was flying the V120D02s around the living room when I touched the DVR, left a small mark on the front of it and crashed. Unfortunately the crashed caused the tail rotor to slip on one of the gears, so while taking it all apart to see what was the matter I got some great pictures of the content of the heli:

Saturday past was spent at Bill and Tracy’s, (with people we didn’t know prior to this engagement,) winterizing their barn. We helped by putting up timber to fix an internal wall to their barn for insulation. Taking down parts of the wall’s in preparation for the false ceiling to go in. The work is all being carried out by friends and volunteers, as Bill is in a wheel chair after his service in the military. It was a stunning day in terms of the weather and good fun meeting many kind and caring people from a small community who had turned out to help. Working is not yet finished, I would happily have kept going back to help finish up if it where not an hour out and given that we were not in the throws of moving.

Rain drops kept falling on my head each time I went outside today. We almost went for a walk,we reached out “trail head”, the darkening skies and weather warning this morning caused us to abstain. Instead we wound up at Walmart where we finally found and bought a travel kennel for cat-a-puss of the right proportions and with all the necessary bells and whistles as required by whom ever it is that regulates these things.

We ate in the New Sudbruy Mall, where while standing in line-up for the KFC, we were discussing eating Putin, and how we find this meal to be heavy and stodgy and the virtues of anything else, to which I said “says he who’s about to eat deep fried chicken”. the lady in front of us laughed out! We were mused by this episode.

Upon bring the kennel into the flat, Tigger took one look at it, heard the noise of the metal bars on the plastic case and run for his life, hiding in the bottom of the wardrobe for a good few minutes. He’s since been and taken a dubious look inside, but he’s generally avoiding the kitchen when the case is. I was pretty impressed that he was able to presumably recognise the sound and put two and two together.

We were invited to accompany Tibor, Zsuzanna, Bill and Dana on the Cortina cruise on Ramsey, for Tibor’s birthday. We enjoyed a lovely evening with them all.

Also Tigger has been up to his old tricks:

I received my gears for the helicopter servo through the post today, so I replaced them and tested the helicopter in the kitchen, all is now good, just need the wind to drop for some flying to happen outside. 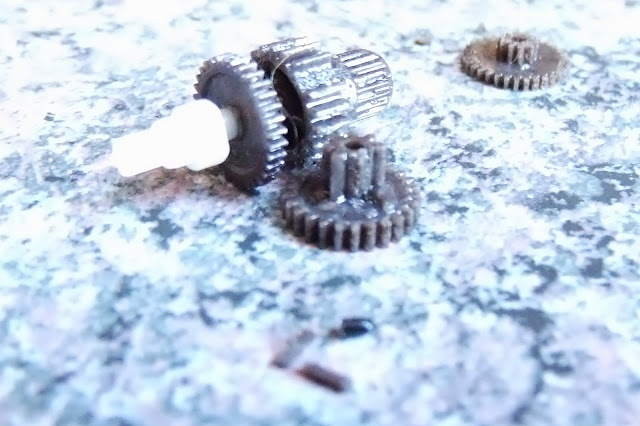 I think the gears are missing upward of three teeth. Totally different subject, I was watching the news the other morning, there is a scrolling head lines bar across the bottom of the screen which I usually read if the news is dull. One head line read something like “…more than some people had…”. More than some? MORE THAN SOME? Who on earth do they employ to write their headlines? Indeed..

Tibor, Zsusanne, Hannah and I went on René’s French River cruise on Saturday. It is called his Dinner Cruise, we left Totem Point Lodge at about 5pm in René’s pontoon boat, René gave a running commentary on everything as we passed it, his knowledge of the area was so up to date, he’d been told something only a couple of weeks and told us as much. It was a very pleasant trip out to the Crane’s Lochaven Wilderness Lodge, where we had Thanks Giving dinner. We then were brought back via other locations of beauty.

Today I went to the gym at lunch time, got there, got part changed before I realised that I had neglected to pack a t-shirt. I inquired at the front desk if I might borrow a “lost and not found” t-shirt, instead they gave me a t-shirt in exchange for giving them details of at least 3 people.. it’s a long running offer.

We went for a walk this evening at the Laurentian Reserve, we walked to the lookout at the top of the path, it’s always a beautiful view from there, then we walked on along the path (hiked on the trail) until we were almost at the end of creek part of the lake, where we spotted some beavers building a dam.

The weather past week or so has been grey, cloudy and cold, (Cold = 20°C) and at times raining. So not too spectacular. I am convinced that our visitor brought this bad weather from her home country… Tut. We’ve been doing a bit recently, since we do indeed have a visitor, this past week we’ve been trying to go out and about, we went to the cinema last week, go-karting on Thursday with Tibor, Friday night we had dinner out and Saturday night we went for one of Troy’s ‘legend wait for it derry’ pool ‘par-tays’. Today we were up very late because of the late night, we went to Windy Lake, thinking that we might have a swim, but that didn’t come off as the lake lived up to it’s name, it was windy and cool. On the way back we stopped in at Onaping Falls, as the last time Rebecca saw it, there was approximately a foot of snow on the ground. We then headed home, as we were travelling along the stretch of road between Azilda and Sudbury, I was thinking that the stack was smoking nicely, and was wondering what comes out of it, in terms of chemical make up and also if they might be pouring today. I went on a site visit last week, which took me right in to where they pour, but they weren’t at the time of my visit. However, as we were driving down the road here at 46.503806,-81.042797. We saw Vale pouring the very hot molten slag from the smelting process:

We had to turn around and drive back to find somewhere to pull over and view the spectacle from.

Agawa Canyon was our day trip destination on Saturday, we got up at 3.40am for a 4am start. Hannah drove the three and a half hours to Sault Ste. Marie, we arrived at the train station just as the train pulled in at 7.30, though it gives people half an hour to board. The train left as scheduled at 8am. The train runs on an old industrial track built in the 1800’s, it is still used today for both passenger and industrial goods trains. The train reaches eye watering speeds of about 40mph… pretty slow. FYI, all rail services use miles per hour and miles as units, because they were all built back before the km was invented! We had breakfast on the train (Obviously I’d had my Shreddies before we left), it was a very nice, but not as nice as the one we caught out west. The train was fitting out with TV screens which tell you information as the train travels, very interesting. The scenery was lovely, a little more hilly than we’re used to here in Sudbury. We reached Agawa Canyon at about 12.15pm, everybody “detrained” (That’s the term they use, we could only imagine they’d never head of ‘disembarking’) and set about either walking the trails or eating lunch in the park given that we had been told to be back on the train at 1.50pm, if we missed it we would be sleeping in the Canyon for the night, as there are no roads to the canyon. We went straight for the panoramic look out, which is up 321 steps all of which Hannah counted, by step #150 Hannah passed out.. te he, she posed really… Since I took two steps at a time we disagreed on the number of steps when we reached the top. This trail was supposed to take 40mins, but we managed to walk, eat out lunch and finish walking the trail in good enough time that we fitted in a second 40min trail with ease. We walked to the Bridal Veil Falls and reached the train at 1.30pm. We really enjoyed the leisurely day on the train, we stopped in the Sault on the way back for some dinner and I drove us back home for about 10.15pm.

We went to one my work colleagues weddings yesterday. Last night Tigger was on the arm of the sofa with all four legs ganging off the edges, the pictures don’t tell the story as well as they might, but still, here they are:

And then today, I discovered why my helicopter was not flying well, so I set about fixing it, only to have Tigger come and lie right through the middle of everything..

Tigger has not aided the healing of his injection wound, he licked and scratched at it a lot, so we took him in for a visit to the veterinarian. He was not best pleased at the prospect of riding in his carry case again and fought to avoid having to go into it.

He got a clean bill of health, but the nurse did suggest that we try him with a shirt on, which we thought was well worth the laugh. We got him a “princess” shirt for a small dog. After a short period it became clear that he was not thrilled with his new garment, so that was the end of that. Just enough time to snap a couple of embarrassing pictures of him.

He’s seeming considerably better for having had the wound cleaned and no shirt on!

For nostalgia sake I have measured and drawn a floor plan of our apartment, in a similar style to that of Hannah’s picture of the Friend’s apartment floor plan, here’s ours: 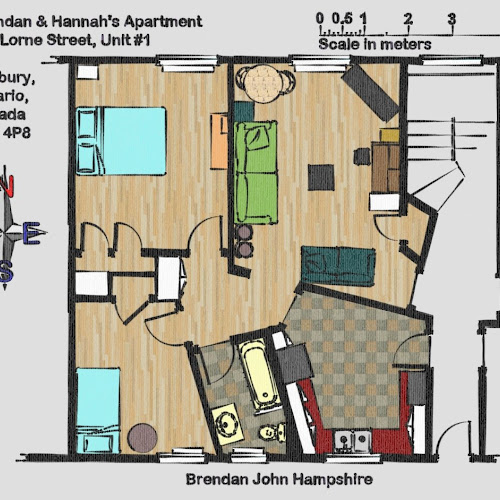 Link to the full size image