We went to Onaping falls on Saturday morning, then we returned to Sudbury and went skating at Queens skating rink, where I fell over three times in two laps.. I am getting better honest! We later met up with Troy and Katie and went bowling and played some pool. Then on Sunday we went to Science North for most of the day, when it closed at 4 we went and did a quick skate on the lake, it was very bumpy.. Here are the weekends pictures.

Also this is a video of Quillan climbing down to get fed.
http://youtu.be/jVfwH4W0sL8 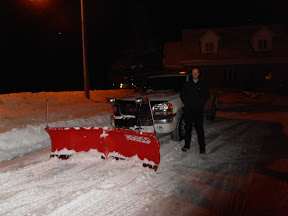 It is forecast to snow a lot this week, it started today.. I heard that we are meant to get about 15cm today, then more tomorrow. We went to the Big Nickel after work today. Pictures.

We decided to go to Niagara with Rebecca. We checked the weather report again and again prior to our drive south. In the end we had great weather, it was blue sky’s and sun all the way there and back, short of the last hour and a half to Sudbury. It was light, no where near as bad as when Hannah and I drove down three years back. In hind sight we drover in particularly poor conditions that time! I didn’t bat an eye lid at the time, maybe I am getting…..
We had a great time, saw the falls and went into one of the casino’s. We also met up with one of Rebecca’s friends from Uni. Her dad took us out for dinner at a nice Italian restaurant in Niagara. The day after we went on the journey behind the falls then went to where the whirl pool is, but there was no whirl pool. whether that was due to the flow rate of the river or not I don’t know, but it wasn’t there.
Here are the pictures

This is a video that I took while flying along..

Hannah and I were out almost all of Saturday doing things, mainly though we went for Coffee with a lady Hannah used to teach IT too, we went to Tim’s in the morning. We went our separate ways around lunch time, Hannah went and played Porketta Bingo, where she had a great time and won some porketta!! It is played by purchasing three playing cars, i.e. a king of spades, a seven of clubs and a 2 of hearts. they are stuck to a piece of card, then the caller calls out the cards, once they have called all of your cards you shout out ‘Porketta’. You win 1lb of portketta which is very well cooked and seasoned pork. Mean while I had gone off to meet Brian to go and take aerial photos of the wild life centre. He has a microlight plane which he built. We flew out over lively, then he suggested that we fly 70 miles (Nautical miles obviously) north to where his brother in law and a friend were ice fishing, so we went and landed on a frozen lake, helped them build a fire, they were going to camp out over night while fishing in -17 and a gale for the fun of it, we took off again and headed for home. Then on Sunday we didn’t do much!

People out ice fishing, the lines in the snow are snow machine trails.

Flying above the forests of North Ontario.

This was taken on the home flight